By Ash Powell on December 31, 2010 in All, Dream Signs, Experiment, Flying, Lucid 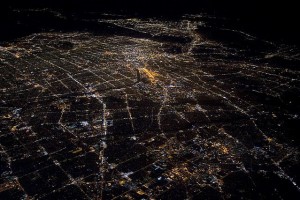 Prologue : Last nights lucid dreams were confusing for sure.  It seems as if some of these dreams looped back onto themselves in terms of how I remember them.  It is confusing to know where one lucid section ended and another lucid section began.  So please bare with me if parts seem a little disconnected.  The most prominent thing is that there were three lucid dreams in the course of just a few hours of dreaming.  This is by far a record setting event for me.

The Dream(s) : I remember very little of the first lucid dream.  I know that I was walking on a sidewalk.  Possibly in a city or a suburb of a city.  I remember thinking to myself that I had been Lucid for an aweful long time.  By contrast, my past lucid dream experiences only lasted about 20 seconds.  I managed to maintain lucidity for at least several minutes simply by focusing all of my energy on doing so.  It felt like I had been lucid for more than 10 entire minutes, but I can’t recall anything that happened in those 10 minutes.  And then I remember nothing else of this lucid section.

Next, I was sitting on the floor near a bed in a room that I did not immediately recognize.  I was thinking to myself that I was pretty certain I was dreaming.  I remember nothing prior to this tought that I was dreaming, and I wanted to perform a dream check.  I recall that my previous dream check a few nights ago of trying to levitate failed, so I thought I would try something else.   Something I saw from the movie Inception.  Magically there were a couple of quarters in front of me, and I was thinking I would spin them on edge and see if they would just spin without end, or if they would fall over.  I was having a tremendous amount of difficulty in even getting the quarters to spin at all.  At least 3 times, the quarters fell over onto their side as they would in the waking/physical world.  But I was still quite convinced I was dreaming.  Somehow my own mind was stopping me from making those quarters spin on edge forever.  But I was determined that I would prove to myself I was dreaming, one way or another.

I stood up from the quarters and looked over to the bed behind me.  I saw myself lying on the bed and waking from a dream/sleep.   The bed wasn’t a normal bed.  It was like a sleep chamber of some sort.  Some kind of mechanism to study, interpret, or control dreams.  Somehow I made the connection that I was still dreaming, probably because I was looking at myself in a detached state instead of from within myself.   For some reason I felt like I was trapped in this dream, and I felt like I wanted to wake up.   So I sent a message (telepathically I suppose) to myself lying on the bed to wake up.  As I watched, my body on the bed turned pale blue and started to strip layers of its skin away, like several layers of old paint from a wall in an old house.

As I turned away from myself, I noticed on a security monitor that there were three bodies/shapes standing outside the front door of the house.  These were not normal people either.  They were cyber robots with super powers, and they were looking for me.  They wanted to capture me.  No longer lucid at this point I was focused on escaping these cyber robots.  I ran upstairs and found my way out a window on the second floor and started to run from the house.

This is one section where the dream seems to loop back onto itseelf.  I have two distinct memories of leaving that house.  Once (this time) on foot and not lucid, and another time in a truck with two other people, and completely lucid.

Skipping to the lucid dream section (loop), I was driving a truck with two other people in the truck with me.  We were either trying to escape pursuers, or we were on a mission to get somewhere faster than the truck or traffic would allow us.  I knew I was dreaming at this point, and told the two other people that we didn’t need to drive at all.  I said “Watch this!”.   And I levitated the truck and all three of us into the air and started us flying high up into the sky.

It was dark out, and we were well above the city lights.  I was moving fairly fast over these lights when I realized that I was being aimless with my lucidity.  I was allowing myself to be caught up in the excitement of flying and being lucid.   I immediately focused myself on Experiment B.   I told my passengers to hold on while I set out to land the truck in a quiet place below.  Looking down, I saw a patch of area with no lights at all.  It was like a river (the LA River to be specific) cut through all the city lights, and there were trees and parks all along it.

As I guided the truck down toward the dark area, it didn’t seem to work as expected.  While the ground did get closer, once I stopped it seemed that I was right back where I had started in terms of altitude.  I had done nothing significant.

Then I remembered that I should not need to fly, drive, or walk to get anywhere.  All I had to do was imagine myself where I wanted to be and I would be there.  So I closed my eyes in mid flight and began to focus on the destination.  But alas, I was confused about my destination.  My initial thought was that I wanted to get to the dark areas and to the trees so that I could truly relax and meditate.  But also, the thought occurred to me that I could simply imagine myself into my sons bedroom with the deck of cards (See Experiment B).  I believe that imagining two seperate destinations at the same time may have caused some problems with my focus and the results of my action.  After closing my eyes and concentrating, this dream section came to end.  Though I’m wondering if I ended up in the dream chamber as the body that was lying in the bed above.  I’m a bit confused in trying to remember the time-line of these dream events.

Epilogue : While I feel a little disappointment about having the same problems with getting to my destination, I must celebrate in the fact that there is significant progress.  Most significant is having three lucid dream sections in one night.  With more lucidity comes more opportunity of course.  And the other positive side is that I was quickly able to adapt and focus on the experiment.  I believe that in future attempts I will be able to focus on the clear set destination of my sons bedroom, and to block thoughts of all other destinations.  I think before closing my eyes in a dream I should first repeat to myself, more than once, “only one single destination”.  But I may also need to reenforce the thought of being “lucid” when I arrive at the destination.  I have a suspicion that the mere act of meditating toward a destination is resetting my lucidity somehow.  I’m suspecting that is how I ended up on the floor next to the bed performing dream checks.  I suspect that I ended up on that floor from the sidewalk in the suburb of the earlier lucid section.  I was in a bedroom afterall.  Just not my sons bedroom.

I think perhaps I should keep my eyes open as well.  I think the closing of the eyes may signify some larger shift/change that my memory can’t seem to handle.