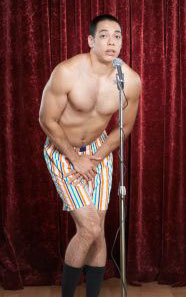 I was parked along side the waterfront about 50 yards west of downtown Kodiak Alaska.  I had pulled down into a gravel area.  I was getting ready to drive back out onto the road when I saw a Lego cat trying to crawl up on top of a small brick wall that separated the road from the gravel area.   I gave support to the bottom of Lego cat and help him get on top of the wall with a little push.

Then I was standing next to the wall.  My sister was on the other side of the wall, and so was another man I did not know.

When I looked down, I noticed that I was wearing nothing but my underwear.  I had no shirt and no pants.  I thought to myself “Great, I’m in downtown Kodiak Alaska wearing nothing but my underwear!”.  I hugged myself, both from being a little cold and a little embarrased.  As my eyes scanned the wall, I saw my shirt and pants sitting there on the way.  Relieved, I started to throw my shirt over my head and I started to laugh.

I looked over to my sister and I said, “Ya know, this is one of my strongest dream signs!  You know what a dream sign is?”   The confused look on her face prompted me to explain.  “A dream sign is something that will often happen to your in your dreams that would rarely, or perhaps never happen to you in the waking/physical world.  A dream sign can be used to recognize when you’re dreaming and help you to become lucid in your dream.”.  Then I pointed to downtown Kodiak, about 50 yeards away and said, “For me, walking in downtown Kodiak with nothing but my underwear on is one of my strongest dream signs.”

Prologue : So, there you have it.  I had finished explaining to my sister that I had just had one of my strongest dreams signs, and then….  I failed to perform a dream check, I failed to check my reality, and I failed to become lucid, as I most certainly should have at this point.