By Ash Powell on June 15, 1994 in All, Out of Body Experience, Sleep Paralysis 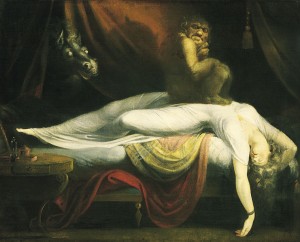 The Waking Dream : I was lying in my bed, taking a nap in the middle of the day. At some point I became conscious. The room was bathed in sunlight, and I was lying on my back looking up. Though I could also see down toward my feet as well, and I could see all around me on the bed too. It was such a strange sensation to be able to see things around the room, and yet I felt trapped in my body and unable to move.

There were these children sitting on the bed with me, and they were smiling and laughing and being playful. They were calling to me and encouraging me to follow them. I was extremely conflicted about the children. On the one hand, they were really compelling to me. Their playful nature and excitement was drawing me toward them, and yet I felt this heightened level of anxiety and fear about them too.

At some point I began to float up off the bed, though I don’t recall that my body ever became mobile. It was just this floating up sensation. And as the children were celebrating my exit (possible OBE?) and calling to me, my fear increased. It would be safe to say that I was now terrified. I really did not want to follow these children, yet the compulsion to follow them persisted.

At this point, my dad came up beside me and guided me in the other direction. I don’t recall if he said anything. But I recall that his basic message was that I didn’t want to be following those kids and that I should come with him instead. I was so relieved when he guided me away from the children.

Prologue : In my recent research, some twenty years after this happened, I’ve come to believe that this experience is very much in line with what is called sleep paralysis. Sleep paralysis is often accompanied by hallucinations. And it makes a lot of sense to me. The brains access to motor functions are normally disconnected when you’re dreaming so that you don’t act out your dreams. So it’s entirely logical that you could feel trapped in your body and be in a half dream half awake state.

While I recognize the likelihood that this was nothing more than sleep paralysis, I find it odd that the only time this sort of thing has ever happened to me, was when I lived in a house that all three of my roommates at the time claimed was haunted. One of the tenants after us also claimed the house was haunted.

The Haunting’s : My girlfriend claimed to have seen a ghostly man wearing a hat in the garden of this house. She also claimed that some entity was likely responsible for dropping a planter on her head. My best friend claimed to have seen the same (or similar) man in the downstairs of this house near his bedroom. My best friends grandmother, who came to visit for a while, one day said she heard someone run across the dining room out onto the enclosed back patio, and when she went out after them there was nobody there. There were many incidents such as this. These are just some of the ones that I remember.  Keep in mind that we only lived in this place for six months when all of these weird things were happening.

About three months after we had moved out of the house, I arranged to pickup some of our old mail that had been delivered to the house. The guy was really friendly as he invited me into the office space to retrieve our mail he had been storing. But before he would hand me the mail, he cocked his head to the side in a really nervous and hesitant manner and said “so…. you used to live here… right?”.  After I said yes, he then was more hesitant, taking a breath, and said, “You ever notice anything,,,,,  odd?  going on?”.  And I smiled widely, because I knew where this conversation was heading. I think I even laughed out loud. I said “yes, absolutely there was some weird shit going on this place”.  I explained that there were some haunting experiences in the house when we lived there.

After my laughter and explanation, he relaxed and looked relieved. He was so thankful to know that it wasn’t just him. He explained that he had stayed the night in the separate little shack next to the house one night. In that shack, there was this really wide shelf that was just above the height of your head. It was big enough that someone could have slept on it if it was strong enough. He explained that while he was sleeping in the couch underneath that shelf, he heard what sounded like chains being dragged across the shelf that was just a few feet in front of his face. He said that he was paralyzed with terror and couldn’t bring himself to move and run away for several hours after the incident.

My Thoughts : I recognize the science here, and the classification of sleep paralysis. It makes perfect sense. But I also find it fascinating that it has only happened to me in this house that seemed to be haunted. I can recall no other instance in my life of sleep paralysis.