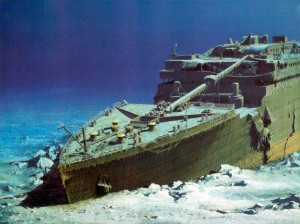 I was SCUBA diving, exploring the sunken wreckage of Titanic.  I was going between looking underwater and looking above water where there were little air pockets of breathable air.  At some point I became aware of the sound that the SCUBA gear was maing.  The breathing sound.  As I surfaced into an air pocket, I expecdted to be able to remove the SCUBA and breath naturally in the air pocket.  However, after doing so, the sound of the breathing through the SCUBA gear still existed.

Perhaps to my disappointment, I didn’t have a plan of action if this (Lucid Dreaming) had ever happened.  For a brief few moments I couldn’t figure out what to do.  I just floated in the water and the air pocket and just concentrated on my son’s breathing.  It was such an awesome realization and I was becoming a little too excited and I began to worry that I might wake myself up.  So I focused on keeping my eyes shut just in case.

Finally, I embarked on a course of action.  I decided to try and alter my dream, which is something I probably was not prepared to do yet.  I began to levitate out of the water a bit and focused on flying out of the ship.  I think the problem is that I had no clear destination in mind, as I rose out of the water.  I became more aware of my son’s breathing and more aware of my physical body.  I believe I was moving between the dream world and the real world.

I quickly become overwhelmed with two completely different realities.  One of complete light, and one of complete dark.  Each reality continued until I was completely enguled/overwhelmed by both.  At this piont, the dream just shut off.  I did not wake up, but I did not seem to continue the dream.  Everything just ended.

Eventually I started to dream again, but I was no longer Lucid.  I don’t remember a lot of the following dream, but it loosly involved a boat, and being at the beach.

Prologue : Much of the dual reality sensations and “shut off” in this dream seem to lend support to theories proposed by Robert Bruce in his book Astral Dynamics.  He talks about multiple levels of existence that may cause simultaneous memories over the same block of time.

View all posts by Ash Powell →
Sleep Paralysis or Ghosts with OBE?
Yoga instructor invited me to a spiritual place