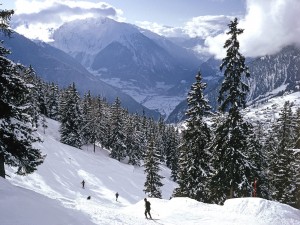 As I approached the top of the snow covered mountains, I marveled at the vivid appearance of the snow covered trees.  My friends were in front of me, and we were all riding horses.  I wanted to touch the snow.  I wanted to feel its texture in my hands and that’s when I had the strong deja vu.  I knew I had been at this very mountain top with the same exact feeling of wanting to feel the snow in my hand, and surrounded by friends on horses.

I realized quickly that I had been here only minutes before, in a dream that I awoke from.  I had fallen back to sleep, and ended up repeating the dream I had just had.  At this point I immediately became lucid.

I decided to focus on maintaining lucidity, and began reminding myself that I was dreaming as I dismounted my horse at the top of the mountain.  My eyes followed the snow from tree to tree and then to my friends as they began unpacking their horses and preparing for camp.  I had a great sense of elation and well being.  I felt as if I was home in my heart.

All my friends were preparing for dinner.  We had been on a long journey and it was extremely important that we replenish our energy with a good healthy meal.  Though I told my friends I would not be joining them for this meal.  I told them that I wanted to take a walk by myself for a bit.  While they briefly argued that this would not be wise and that I really needed to eat something, I assured them in the most peaceful demeanor that I absolutely had all the energy that I needed.  I knew I was completely safe.

My friend Cheryl approached as I was preparing for my walk, and asked if she had done something to upset me.  I smiled and told her no.  I explained to her that it was something incredible that had happened.  I told here that I was dreaming and that I wanted to explore this world.  Cheryl was very supportive when she realized that I was dreaming, and she offered a suggestion.  She said, “Well, since you’re dreaming, you could have nice cold beer”.

I could think of no reason why I should not have a nice cold beer, and so I agreed.

While Cheryl went off to fetch me a beer, I enjoyed the scenery just a little bit longer before I lost my lucidity.  As she returned, she returned with a horse in tow instead of a beer, and apparently I’d be going for a horse ride instead of a walk.

For those that may not know, I have been sober since January 7th 2009.  I am a recovering alcoholic, and maintain my sobriety with the knowledge that any amount of alcohol would likely take me right back to that unhealthy place I was before I quit.  I have no belief that I could have just one cold beer and be okay.  That being said, I have unintentionally had alcohol in my dreams before remembering that I don’t drink.  This dream is the first dream I’ve ever had where I actively decided in favor of having alcohol full well knowing that I’m a recovering alcoholic.

I have the feeling that if I were to pursue having lucid dreams for the purpose of drinking alcohol that this would be an extremely unhealthy and unwise endeavor.  However, casually having it suggested by a dream character (possibly my subconscious) and agreeing to it, did not seem dangerous to me in any way.  It seemed perfectly natural and okay, even now that I’m awake and contemplating it.

This dream was most likely inspired by a couple of recent events.  Last night before sleep I was reading book 10 of the wheel of time series, “Crossroads of Twilight”.  The character Perin was  riding his horse in the snow covered forest.  The writer made note to comment on the hard snow crunching under the feet of the horse.

View all posts by Ash Powell →
A benefit of recalling or recording your dreams : Less Bad Days
Gratitude