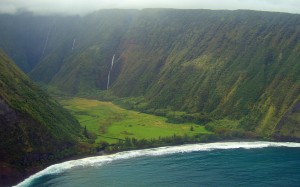 I’ve included the image to the right as this valley in Hawaii is the closest place in the real world to match the place where this dream takes place. In 2009 I had visited Waipio Valley, which is one valley over from Waimanu Valley pictured to the right.

The Dream : I was driving fairly fast through a mountain pass, much like what is pictured here. There were a few friends in the car with me. As we emerged from the pass, I was going too fast to make the turn and we careened off the shore and into the ocean. The car immediately sunk to the bottom, which seemed to be about 200 feet deep. The water was murky brown. As I began to swim to the surface, I did not feel worried or concerned, as somehow I knew that I could breath underwater. I took a deep breath as I slowly ascended to the surface.

While my friends were still floating on the water above where the car had sunk, I was in a building (bed and breakfast maybe?) just near the place on shore where we had careened off. I had reserved a room for us, and for some reason I was also sampling a small glass of fine custom beer. It was like I was tasking a small amount of wine before the waiter poured the full glass from the bottle.

There was about 3 swallows of beer in this glass. This beer was quite literally the best glass of beer I recall ever having. It was slightly bitter tasting, and tasted a little like some other fancy beers I had drank. But this one was just better. The moment felt so entirely real to me and the taste was incredible. In tasting this beer, I had satiated a craving I have been having but have been unable to satisfy in waking life.

Prologue : You might want to read about the lucid dream I had just two nights later. https://www.lucidheart.com/2014/02/15/not-the-answer-i-expected-from-my-subconscious/